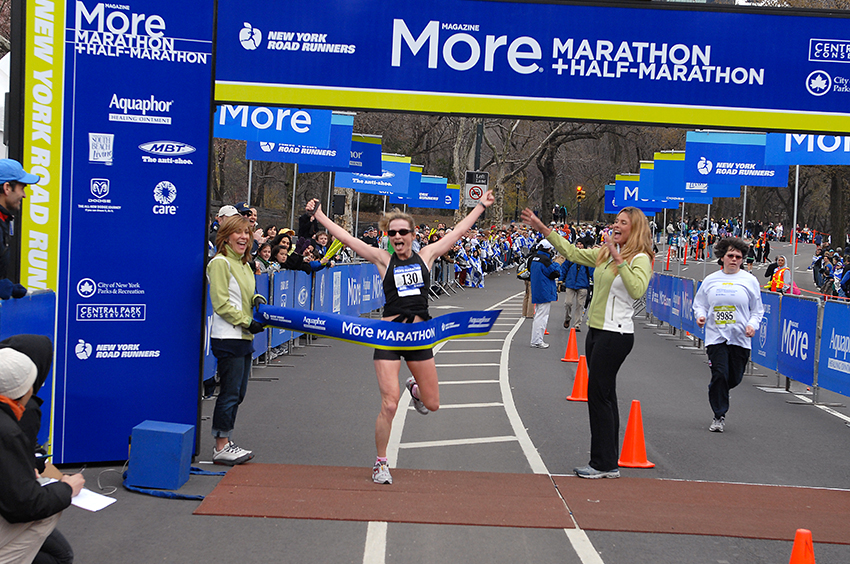 We’ve finally managed it, after weeks of studying data, courses and elite performance, we have the formula that has eluded the best marathon minds for decades – the formula for the world’s fastest marathon course!

Well not exactly…but if you’re scanning the marathon listings in search of that perfect race, you know, THE ONE, the course where you will run your new personal best, below we have six ways that you can select your next race when you’re running for time and not pleasure…

1.     If you’re looking to scrape seconds off of your existing PB : follow the elite
The fastest courses must be the ones with the fastest finish times, right?  Well, yes and no.  Top runners select only one or two major races a year, and since they often they race tactically (not necessarily for a record) fastest times may not reflect fastest courses.

Never fear however, the The ARRS (Association of Road Racing Statisticians) have studied elite runner data over a number of years and have come up with a formula based on average elite performance.

They publish a set of “race time bias” data. Each race is allocated a negative or positive value in seconds. The value represents the amount of time above or below their expected time that elite runners (on average) achieve on that course.

Below are the ten fastest marathon courses according to the ARRS data, so see you in Paris in 2014!

2.     Look to the Average: Median Race Times
Ok, some may argue that the fact the elites may gain a few seconds on a given route is not much help for us slightly slower mere mortals.

Running USA publishes an annual report showing the races with the fastest and slowest median race times, that is the time in which the majority of runners finished the race.  This gives a much clearer idea of the typical finishing time of a non-elite runner, but unfortunately only covers US races.

And of course, races such as Boston have a quicker median time regardless of course difficulty as they pre-select quicker runners.

We’ve not (yet) found a recent similar list for European or international races, but many race websites publish race reports for previous years, including the median finish time.

3.     The famous BQ – percentage of Boston Qualifiers
A third approach is to check out the percentage of participants who gain a Boston qualifying time. This is a big deal in the USA as Boston is one of the most prestigious mass participation running events and you need a proven qualifying time to take part (although you may run with a charity or agency bib without qualifying).

I distinctly remember being in the start corrals in Chicago hearing all people around me talk about their hope of achieving a BQ  – yep, all of these people around me were about to run a marathon in the hope of qualifying for…another marathon.

Again, this information is much more readily available for US races, but if you’re interested, Marathonguide.com publish a list of US races with the highest percentage of Boston qualifiers each year.

4.     Only for the very dedicated – track 8,500 amateur runners over 11 years.
In our search for the fastest marathon courses we came across an interesting post by arisrunning.com where they highlight what they consider to be the flaws in the above methods and propose their own set of results (yet again US based).  They searched through 5 million finish times to identify 8,500 runners (identified by name, age and city) who had averaged at least one marathon a year for 11 years.  They then compared the same person’s performance across the different courses.  Combining the data gave a general indication of variance in performance for each course – all based on amateur runner performance.

You can read their full explanation and data here.

It’s a lot of work, but if anyone would like to reproduce the study for European marathons we’d love to see the results!

5.     Ask a Marathon Winner & Course Expert
After flicking through Hugh Jones’ book “Marathons of the World” and adding at least another five races to our “must do” list we decided to try to contact the man himself.

Hugh Jones, the 1982 winner of the London Marathon, now journalist and editor of Distance Running Magazine and secretary of AIMS, the Association of International Marathons and Distance Races was kind enough to take the time to reply. He explained that in his book the races were awarded a rating based on his personal experience and judgement, after having run or even measured the course of many of the races listed.

He went on to say that, “Any “difficulty ratings” are a bit subjective when it comes to individuals because different people have different tolerance for heat and cold. With gradients there should be some theoretical calculation that allows the “assistance” or “hindrance” of gravity to be accounted. The US measurement community looked into this in great detail about 20 years ago, when it became contentious that Boston could not be a record-eligible course (where the overall drop is more than three times the 1m/km allowable) – never mind the possibility for wind assistance, which in certain years has been considerable (1994, 2011). But they never did manage to come to anything as precise as a formula.”

So, it would seem that no-one yet has managed to come up with a formula that takes all of the course variables into account.

6.     Coach Always Knows Best!
So, with all of this technical data, yet no consensus or standard approach to measuring course difficulty, what should you do to maximise your chances of a personal best?

We spoke to our Running Coach Andy Gornati, who provided the inspiration for our very own marathon personal best formula. Here’s what he had to say:

“It goes without saying that the most important thing to do if your aim is to achieve a personal best in the marathon is to train properly.

With that as a prerequisite, let’s take a look at the various criteria in the choice of race when aiming for a personal best.

It’s true that all courses measure 42,195 km, as established by rule 240 of the IAAF (International Association of Athletics Federations) competition rules*, but it is the different characteristics of each measured course that make a race “fast or slow”. If you want to run a marathon to the best of your abilities, you need to opt for a “flat” course.  Make sure you take a careful look at the course plan before registering for the race.

In an international context, the quickest marathons are without doubt Berlin, Rotterdam and London. New York, out of all of the majors, is the most unforgiving.

It is better to opt for a marathon close to home, ideally a race in your home town, as long as it has the principal characteristic of being a reasonably flat course, as mentioned above.  You get to eat at home, sleep in your own bed and avoid disrupting your standard pre-race routine, all of which helps you to get to the start line feeling ready and in control.

If you want to beat your personal record, choose a marathon that is stimulating from a competitive perspective.  Select a race with plenty of participants to ensure that you won’t be running long sections on your own without the stimulus of crowds or other runners.

At the same time, I feel that marathons with a huge number of participants can often be too chaotic and “stressful”. This is both due to the discomfort prior to the start where often you find yourself squashed into the corrals, and the fact there is often a bottleneck in the first few km, making it difficult to run at your own pace.

When best time is your main objective, I think that a marathon with 4 or 5000 participants is about the right size.

The factor that has the biggest impact on performance is without doubt the weather on race day.  Clearly none of us mere mortals is able to govern atmospheric events, but all the same, there are periods with a higher risk of bad weather.  Again, look back to see the weather conditions in previous editions of your chosen race to get an idea of what is typical.

Weather conditions also play an important role in race preparation.  If you decide to take part in a (fast) marathon in September, you need to take into account the fact that your marathon-specific training sessions will be undertaken in the summer months, that is during what is usually the hottest time of the year. Personally, I prefer to run an autumn race in the months of October or November, and a spring race between the start of March and mid-April.

*…in all marathons that are directly under the control of the IAAF, the measurement error cannot excced 0.1%, that is it cannot be more than 42m.